The Legacy of Danny “Boy” 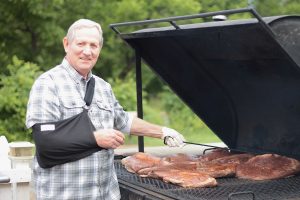 A long time ago, a little boy in Camden County, North Carolina watched his daddy win a restaurant in a poker game. That little boy was Carolina Brothers Pit Barbeque founder, Danny Hurdle. The Hurdle family transformed the eatery into Hurdle’s Restaurant, and spent their days eating, cooking, and serving barbeque to locals. Danny loved every minute so right then and there, he decided to devote his life to perfecting the craft.

If you’ve ever met Danny, you know that his passion for BBQ is no secret. He has spent decades nailing down a precise cooking process. Experience has produced three main smokin’ tips from Danny:

A Note About Homestyle Carolina Barbeque

Barbeque is a method of cooking that flavors meat by slow cooking over low heat. The American tradition is centuries old and is most well-known in the South, where each geographical area is known by its sauce and cooking variations. American barbeque has such deep roots in the United States, that it was a common practice among Native Americans before colonization, a means of survival during the Civil War, and now serves as a way to gather and celebrate the bond between man and nature.

Danny Hurdle took it upon himself to expand the North Carolinian traditional pork, beef, and chicken barbeque into a place unfamiliar with the food: the DC-Maryland-Virginia (DMV) area. Before Carolina Brothers, the mere idea of tender, hickory-smoked meat coated in a tantalizing, slightly-spicy sauce was unthinkable in northern Virginia. Thanks to Danny and his carefully crafted recipes, the smell of smoking meat in a traditional NC pit barbeque points to one place: Carolina Brothers Pit Barbeque.